Learning lessons in Tuscany and Palermo

***Disclaimer: there is something weird going on with the font in this post.  I have tried about 1,000 times to fix it but nothing is working.  I have a life to get back to so I'm just going to let it be.  Hopefully it doesn't bother your reading enjoyment too much. ***

Welcome back!  How was your Labor Day?  Mine was spent abroad at a wedding in Tuscany, then visiting family in Sicily, and finally exploring Israel.  It was a long and awesome vacation and while it's tough to get back to the real world, I'm excited to report back to you about my trip.  I'll cover Tuscany and Palermo in this post and Israel in the next.

Out of the gate I must warn you that candy questing in Italy proved hard to do because of the wedding and family commitments.  I didn't have a whole lot of free time to wander around and check out candy stores.  That said, candy always has a way of finding me and I always find a way to eat it so I do have some candy AND some travel lessons to share with you from my time in Italy.

First up was Tuscany.  As mentioned, I was there for a wedding which was stunningly beautiful.  The couple arranged the entire weekend including transportation to and from our villa to all events.  Since I didn't have any free time to sniff out candy on my own, I was surprised (and psyched) to see that the welcome bags had a fun new find inside: Nutella B-ready bars. 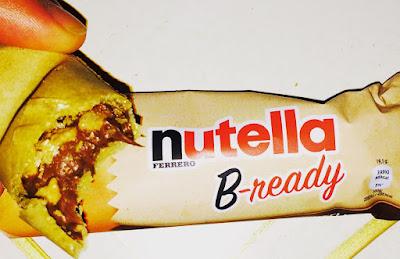 I am a huge fan of Nutella (along with everyone else in the free world) so I was really excited to discover another way to inhale enjoy my favorite Euro import.  As soon as I opened the welcome bag I got to work tasting this new bar only to be extremely disappointed :(.  That tan, papery, outside shell of the bar that you see was REALLY dry.  The kind of thing that you bite into and it crumbles in your hand and flakes get stuck on your lower lip.  As soon as I bit into it I was totally confused and surprised to find it so dry and tasteless.  I sat there, head cocked to the side like a dog, with flakes of papery crumb on my lip wondering why on earth Ferrero decided to house their amazing Nutella in such a crappy, thin, cardboardy package?  It made no sense.  It wasn't until we left Tuscany and drove to the airport that I noticed ads for B-ready.  The ads showed a hand dipping the bar into coffee like a biscotti...ah-ha!  Now it all made sense!  That papery stuff was supposed to melt and cling to the little chunks of Nutella inside to protect them in hot coffee so that you can have little bites of Nutella with your cappuccino.  Genius!  Unfortunately I was unimaginative and short-sighted and left the B-ready bar behind after just one bite, I never even got to the dipping part.  So lesson learned: don't judge your old favorite by its new cover.  Have a little faith.  And if I ever come across these B-ready bars again I'm going to buy twenty one, grab a coffee, and clear my schedule.

Next was Sicily.  First stop was Palermo before heading to a small town in Sicily to see my family.  In Palermo I had a hard time finding any candy stores.  The Sicilians take great pride in and love their gelato so I guess they don't have time for much else in the sugar department.  And I can't say that I blame them, the gelato in Sicily is fantastic (gelato originated in Sicily).  I had all but given up the candy quest in Palermo when I randomly stumbled upon a candy store.  Finally!  Way more excited than I should have been in public, I got to the door and realized that it was Sunday...the store was closed.  Nooo!  Why does Europe always have to follow the closed-on-Sunday's rule???
I pressed my face against the glass to get these photos for you.  So bummed that after finally finding a candy store in Palermo I didn't get to go inside but at least I found one!  I did get the address: Via Maqueda 335 and they are on Facebook if you're ever in Palermo and want to check them out.  But lesson learned: make sure you don't leave it for a Sunday.

Not to be discouraged, I scanned the local corner stores and found some new Haribo to try: 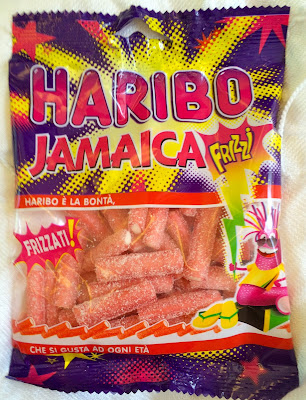 I love me some Haribo and I always have fun finding new flavors to try abroad.  This company seems to crank out country-specific candy based on local taste buds so they never let me down when I'm candy questing in another country.  These Jamaica "frizzi" candies (why Jamaica? who knows!) were small, sour, strawberry cream gummies.  Haribo makes a similar product that I've seen in Spain but this version was thinner with less cream in the middle and the sour wasn't too strong, way less than a sour patch kid for example. 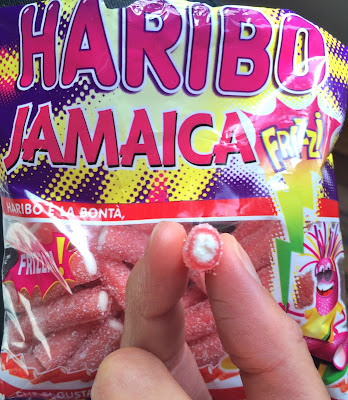 You can see how small the cream part is in the above picture.  I have to say that I prefer the thicker version of this candy with more cream inside, similar to what they sell in Spain and Israel, but the weaker sour flavor was a nice change.  If you like sour patch kids then you will probably dig these Jamaica frizzi's but fans of Swedish fish will prefer the bigger, non-sour version of these strawberry creams.  So lesson learned: when all else fails head to the local corner store and buy some Haribo.

One thing that I saw everywhere in Sicily was "frutta Martorana" or Sicilian marzipan.   This stuff is really sweet, made entirely out of almond paste, but it's gorgeous and looks unbelievably realistic: 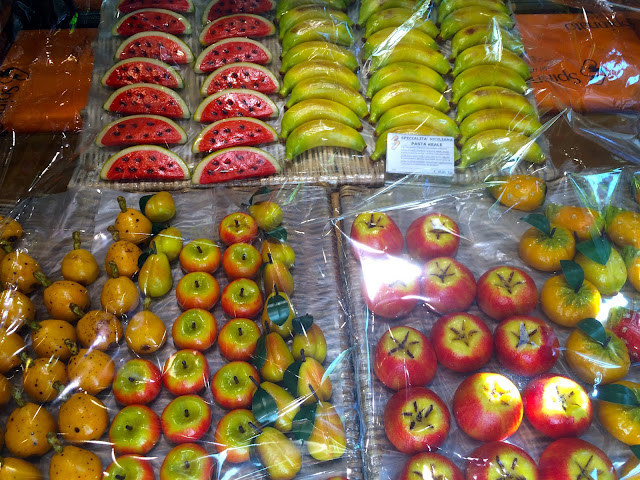 I regret to say that I didn't buy any to taste for myself.  I read in several places that it's sickeningly sweet so I blindly took everyone's word for it and didn't buy any.  Again, a short-sighted decision (hello! you have a CANDY blog!)  If you're only visiting a place for a short time you should always have a bite of their local specialities, just one bite.  Even if it's not good you can at least say you tried it and form an opinion for yourself.   Rookie mistake but lesson learned (again): always taste the local candy specialties for yourself.

In sum, given the lack free time I had in Italy I was worried that I wouldn't be able to hunt around for candy and wouldn't be able to share anything new with you.  I'm proud to say that candy had a way of finding me and also teaching me some lessons.  Lessons like only eat Nutella B-ready bars with coffee, don't leave any shopping (candy or otherwise) for a Sunday in Europe, when all else fails hit the local corner store, and always bite into the local specialties for yourself.  I hope these lessons come in handy for you and your sweet tooth the next time you two find yourselves exploring a new city.
Posted by Keenan Kelly at 11:00 PM