Monday was my birthday and for it I asked my boyfriend Shawn to take me around Philadelphia for a little day-and-a-half trip.  I had never been to Philly before so I had to prepare.  Did that include checking opening/closing times for the museum?  Or googling the history of the city?  Or maybe calling some restaurants to book dinner reservations?  All good ideas and probably what most people instinctively do when planning out a little getaway, but no.  My first instinct was to google candy stores to check out while we were there (it's a gift).  This list included a store that covers almost everything in chocolate (Mueller Chocolate Co.) and a store that claims to be America's oldest candy store (Shane Confectionery).  I'll cover Mueller in this post and Shane in my next.

Our first stop when we arrived in Philly were the "Rocky Steps" of the Philadelphia Museum where I declined to go in and instead green lit Shawn's other suggestion to head over to Reading Terminal Market where Mueller Chocolate Co. has a store.  I wish I cared more about art and had the patience for sight seeing, I really do.  It's just that anything with the word market in it is always way more exciting to me.  So on to Reading Terminal Market we went and this place was AWESOME.  Any kind of food or drink you could ever want was in there.  They had so many food stands, looking around the market made me wish I could eat everything all at once and never get full.  I passed a popular cookie stand which was really crowded and looked sooooo good in order to save up and forge ahead to Mueller Chocolate Co. Muellers' stand (store?) specializes in chocolate covered everything.  They had pretzels, nuts, fruit, marshmallows, potato chips, even chocolate covered onions... 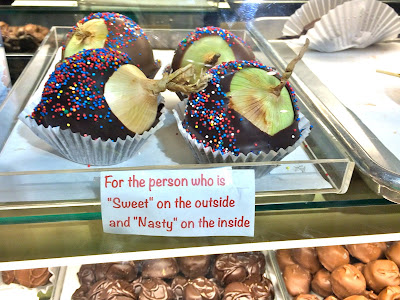 Gross right?  I think it was mostly for effect (I hope!)  They also had fun chocolate shaped organs (for the doctor in your life?) and a chocolate Philly "cheesesteak" made up of white, dark and milk chocolate:
Shawn pulled the trigger right away on a dark chocolate covered sea salt caramel pretzel which looked good but was kind of a rookie mistake because there were so many other choices to consider.  But hey, he wastes no time.  I had a bite of his pretzel and while it was good, it was reeeeeally drenched in caramel.  Just look at the shape compared to the double dipped pretzels:

These are good if you really like caramel and just a bit of pretzel with it.  I was glad I didn't commit to it and had Shawn to use as a guinea pig love. There were so many options in the case that I initially wondered if we could cancel our dinner plans and just pull up a stool to the chocolate case.  After starring down these marshmallows for awhile... 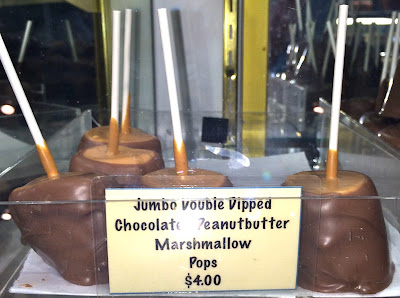 I finally asked the sales person what Mueller's is known for.  She mentioned their famous "chocolate tower" which is made up of a marshmallow, a peanut butter cup, a cookie, and a few other fun things... 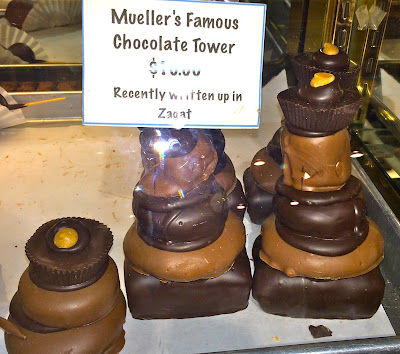 but I didn't want to blow my wad all at once on one item.  I have a major weakness for chocolate and peanut butter so when she mentioned that they're also known for their chocolate covered pretzels and I spotted these, I knew we had a winner. 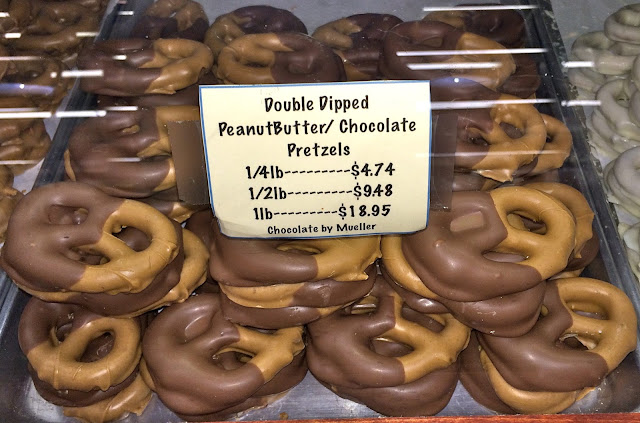 I mean just look at these things!  I've written about chocolate covered pretzels before but these were different.  These peanut butter/chocolate pretzels were so good because they were a very crunchy pretzel covered in a soft coating of peanut butter and then fresh milk chocolate.   Mueller's kept the pretzels fresh (not stale!) and their peanut butter was creamy and soft instead of the dry, powdery consistency that peanut butter can get.  And the milk chocolate at Mueller's is outstanding.  Sometimes chocolate covered things can have a waxy, almost tasteless flavor but Mueller's did not.  Their chocolate had a nice milky flavor and it almost melts on your fingers when you touch it.  Mueller's had the consistency of these three ingredients down in a single bite!  At this point I was all revved up and ready to taste more.  Shawn disappeared so I plowed on without him.  Next up: chocolate covered potato chips.

There is a little chocolate shop in my hometown that makes AMAZING chocolate covered potato chips.  They are the best and my hometown shop has been making these chips for years (long before everyone else caught on that chocolate covered potato chips are the best invention ever).  I had to see if Mueller's could compete with the chips from my hometown shop and I'm happy to say that they did.  In fact, they are the only ones to date who can.  Mueller's uses really fresh, crispy, salty, rippled potato chips with a nice THICK coating of real milk chocolate.  These chips were actually a thing of beauty: 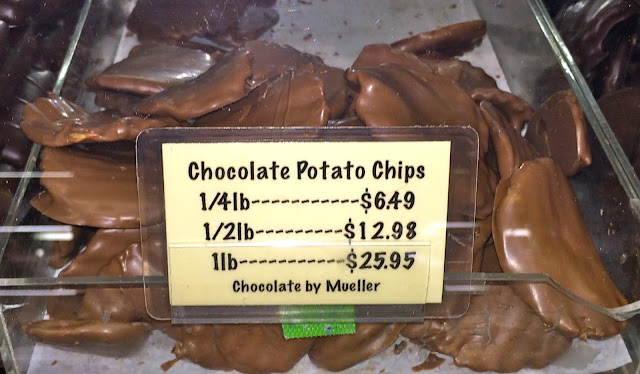 See the thick coating of chocolate on these chips?  It really encased the potato chip inside and made for a sweet, crunchy, salty bite.   If you have never had chocolate covered potato chips, these are definitely the ones to try.  I tried to take a bite and then get a photo for you but this guy in a motorized scooter was like beeping behind me to get past and ruining the moment.  I thought ok really?  there are other aisles you can cruise down, clearly this one is crowded I'm sorry you're in a chair.  So I stuffed the other half of the chip back into the bag for Shawn to try (I like to get his opinion too).

Finally, I tried a milk chocolate covered pineapple slice.   I don't normally like chocolate covered fruit (weird, I know) but I wanted to try these because the pineapple slices were nice thick chunks and not the dried up shrively things you usually see in a chocolate case.  Although I found these to be a little too sweet, I think if you ordered the dark chocolate version they would be a better balance of sweetness.  It was a nice thick bite but since the fruit is so sweet and such a large chunk, the milk chocolate was a little too much.

Ok so at this point I hadn't tasted nearly enough but Shawn was back with a lemonade that I had completely forgotten I said I was "dying for" about 10 minutes earlier (I get totally side tracked by good chocolate) and we had to get going.
In sum, if you are in Philadelphia, you have to go to Reading Terminal Market.  They have every food imaginable so unless you hate eating, you're going to enjoy it.  And second, if you are in the market and you like chocolate, ANY kind of chocolate, then you must go to Mueller Chocolate Co. and taste some of their amazing chocolate covered items (and see the onions) for yourself.  You won't be disappointed!  http://www.muellerschocolate.com/home.html
Posted by Keenan Kelly at 12:17 AM