As promised, I'm back to tell you about Shane Confectionary in Philadelphia, the (self-proclaimed?) oldest candy store in America.  If you read my prior post here you'll learn that last weekend I took a trip to Philadelphia with my boyfriend Shawn.  While we were in town I of course had to check out a few candy stores including the famous Shane Confectionary.  Here's my report:

First off, this place looks completely legit.  It's exactly like stepping back in time.  Here's the storefront which right from the start has an old time-y feel. 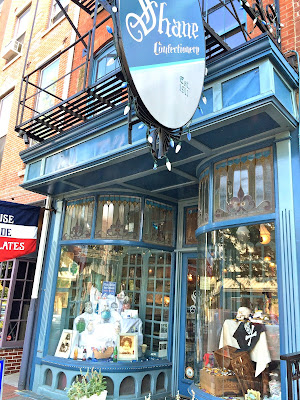 I only did a little research on this place and all I told Shawn was that it's America's oldest candy store, neither of us realizing that Shane's takes this honor quite literally.  When we opened the door, I did a little surprised jump and heard Shawn go "Whoa".   We were NOT ready for this level of commitment: 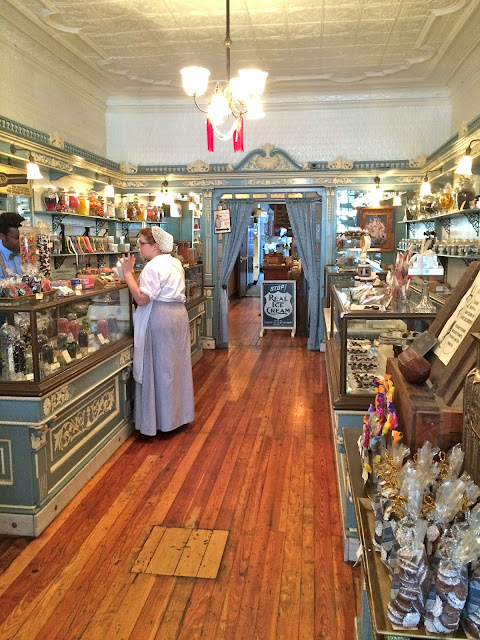 Super realistic right?  I was kinda spooked at how 1900's this store looked and so I acted accordingly...walking around as if I were in a museum, whispering to Shawn and touching nothing. "Look at these...what's that?...they have ice cream in the back???  Shhhh."  Keep in mind that this store has ZERO rules about whispering or touching their items.  I was just so in shock at the authenticity of the place that it sent me right into best-behavior mode.   Here are pics of the cash register which made me ask if they accept credit cards (seriously):
By the way they do, if you spend the minimum amount.  Slowly, we made our way to the back of the store and found some fun old time-y candy items like these chocolate (unfiltered?) cigarettes.  These cigarettes are some of the most hard core candy cigarette's I've ever seen:

I'm so bummed that I didn't buy a pack.  I got so caught up in the moment that I forgot they were made out of chocolate and didn't even consider buying them.  They seemed reeeeally bad for my health and just off-limits, the way I think of real cigarettes.  Again, I can't reiterate enough how creepily real this store was.  It almost made me forget why I was there...to buy candy!

When I asked a member of their very knowledgeable and friendly staff what Shane's is known for she told me their buttercreams, especially the vanilla ones.  Truthfully I was a little disappointed because I've never liked buttercreams.  They're always way too sweet and seem a little boring.  But then she told me that Shane's are made using their original recipe and original equipment.  Ok, when in Rome Philly!  They had several flavors to choose from including lemon, strawberry, coconut and vanilla:
I chose vanilla since it's the most famous of their flavors and coconut, since it seemed like the next logical buttercream flavor of choice.  I couldn't remember ever liking any flavor of buttercream so I was going off of candy-instincts here.  I tried the coconut first which was impressive and PACKED with coconut flakes so it wasn't too syrupy or too sweet.  I was pleasantly surprised which was a nice warm up to what was coming next.
As soon as I bit into the vanilla buttercream my mind went blank and I only wanted more.  This vanilla buttercream was unlike any you've ever had.  It had a really creamy consistency, not drippy syrup or clotted sugar, and it wasn't overly sweet like buttercreams always seem to be.  You can really taste the butter AND the vanilla and the milk chocolate coating was perfect.

Do you see how the inside is oozing out just a little?  It was like biting into a perfectly balanced butter/vanilla bomb with a little bit of velvety milk chocolate on the outside.  Perfection.

Ok so if you are in Philly then you must check out Shane Confectionary.  Primarily because it is so authentic and if you're already in town checking out America's history then you might as well take it a step further and get some candy history.  Once inside, if you do nothing else PLEASE try a vanilla buttercream.  These are so good, there is just no comparison.  And if you're not planning a trip to Philly anytime soon, order their vanilla buttercreams online: http://shanecandies.com/
Posted by Keenan Kelly at 10:17 PM