It's summer! Have you hit a boardwalk yet?

Do you get as excited as I do for boardwalk candy stores?  Or fine, your favorite food on the boardwalk?  You know you do, everyone does.  Someone says "hey, let's go to such-and-such beach tomorrow" and you say "sure, that sounds like fun" but what you're really thinking is "yes! And I'm going to eat that stuff I love from that place I know!"  And then they keep talking but you're not listening because you're still thinking about eating that food you love.  This is good, you can relate to my day of tasting fudge, chocolate candy, salt water taffy, and a chocolate covered twinkie in Ocean City, NJ last Saturday.
This past weekend, my patient and amused boyfriend guided me along the Ocean City boardwalk where he spent many summers as a kid.  We hit up George's Candies, Shriver's Salt Water Taffy and Fudge and Fralinger's Salt Water Taffy.  It was quite an afternoon so I did what any girl who shops at Whole Foods, eats organic, and calls herself a runner would do: skipped breakfast and lunch to save up for it.  This was the perfect strategy because the only way to approach an afternoon full of candy tasting is hungry and excited! Ungh!
We started at George's Candies where the helpful girls behind the counter told me that they're famous for their coconut macaroons.  I ordered a plain one, split it with Shawn, and devoured it immediately.  I didn't even get an interior shot for you (sorry, I hadn't eaten all day).  It was one of the best coconut macaroon's I've ever tried.  It had a caramelized, crisp, exterior with a soft, chewy, coconutty, interior.  So good.

Next it was on to trying some of their chocolate covered animal crackers.  Have you ever had these?  They were delicious! 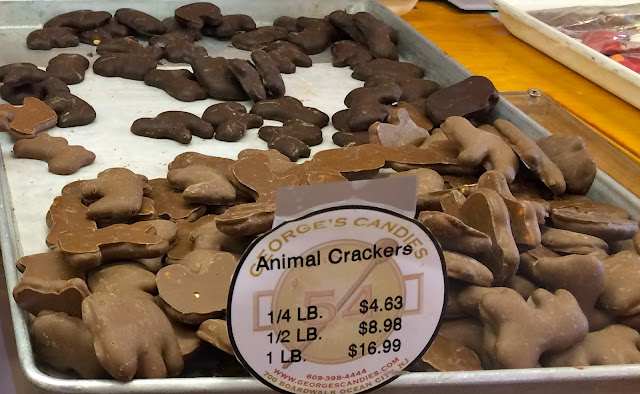 They're good when you want a carb covered in chocolate but a pretzel sounds too salty and a graham cracker sounds too dry.  These animal crackers were NOT stale which makes all the difference.  Chocolate covered foods cannot be stale, that ruins it!  No point!  George's had the freshness factor figured out because nothing in that store was stale.  Then, hey, I ran into my old friends...chocolate covered swedish fish!

Technically I had tasted these before so didn't NEED to buy them but they looked so perfectly covered in chocolate and neatly piled in rows, I had to buy some.  I'm a sucker for pretty packaging!  They were totally worth it.  Nice and evenly coated in chocolate, fresh and chewy.  I could have eaten a thousand of them...kind of wish I did.  Finally, I spotted these: 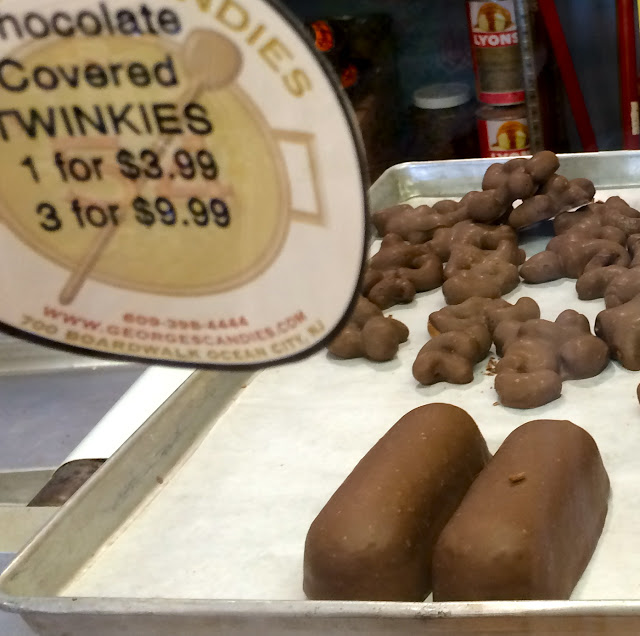 Whaaaaaaaat?!  How perfect do these look?  Truthfully I passed them up at first and then came to my senses, returned to George's, and bought one.  We've all seen deep fried twinkies but perfectly coated chocolate covered twinkies?  This was a first.  Full disclosure, it had been about 10 years since I had a twinkie so I kind of forgot what they tasted like/had a mental idea that they SHOULD taste like vanilla cake and vanilla icing.  This really confused my brain when I bit into one because I was expecting to taste vanilla and smell that familiar twinkie-cake smell but that never happened.  Instead, I tasted chocolate, then some sponge cake and a little vanilla cream, but never really got that vanilla-twinkie smell, taste, and texture I remembered which was a bit of a letdown.  This was no fault of George's, the twinkie was fresh and the chocolate was perfect, it was more that the chocolate/twinkie taste combination didn't live up to my expectations.   Shawn had a bite (yes despite this review I only gave him one bite) and summed it up: "it's chocolate and it's a twinkie, what did you expect?"  Umm, I don't know, magic?!  It's two of my childhood favorites in one portable package.  This SHOULD be the answer to all my dreams.  Somehow it wasn't quite there so the quest continues!  My final recommendation for George's Candies is that if you want to try a chocolate covered twinkie for yourself then by all means go for it, but my picks would be the coconut macaroons, the chocolate covered animal crackers, and the chocolate covered swedish fish.  They are also renowned for their fudge (which is excellent) but I didn't review in this post.  www.georgescandies.com.  Check back on Friday for my post on Shriver's and Fralinger's.